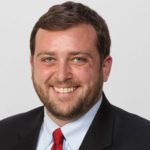 Will Lewis is in a unique position as Vice President of the company his grandfather started, reporting to his uncle George Notarianni, Tolco Corporation’s President and CEO. Lewis is not only the third generation to work in the family business; he is also a member of the generation that is changing the face and practices of the Jan-San industry.

Lewis’ grandfather William Spengler was a chemical engineer who worked for National Laboratories in Toledo, Ohio, and he was unwilling to move his family across the country when the company relocated. So, in March 1961 he started Tolco Corporation with just one product: the D-22 Drum Pump. Lewis says his mother recalls playing under Spengler’s desk in the family garage in Toledo: “He used to say that FOB meant ‘from our basement’.” As so many entrepreneurs did back in the day, Spengler would load product into his car with maps in hand and prospect for customers.

Lewis says his grandfather continued to go to work until he died at the age of 91. Someone would pick Spengler up in the morning and drive him to Tolco, where he would open the mail, visit with employees, and dispense “pearls of wisdom” until about 2:00 in the afternoon. Lewis listened whenever he could to his grandfather’s views on running a successful business and tales of his life as an entrepreneur.

Today, Tolco’s lines have expanded from its core business of pumps and trigger sprayers to include other Jan-San products and sanitary supplies, and the company has 60 employees working in its plant and offices in Toledo. November 2017 marked the completion of a warehouse addition that gives the business 40% more space for pallet locations and three new truck bays. “It’s the first purpose-built warehouse we’ve ever had,” says Alberto (Al) Martinez, Tolco’s Director of Sales and Marketing.

Martinez adds, the company has shifted more of its assembly and finish manufacturing to Toledo thanks to the recent expansion, increasing its workforce by four new employees to accommodate the adjustment. Tolco creates and owns the molds for its products and utilizes manufacturing partners all over the world in addition its own facility. Even with ceilings high enough to stack inventory pallets four high, Martinez says that at first glance
Tolco’s boosted warehouse can look chaotic. “But the reality is that we’re shipping products out so fast - within hours of ordering - that the space is in a constant state of activity.”

Tolco sells only business to business, never direct to end users. Regional sales managers work with a network of independent manufacturers’ representatives across the country, making strategic sales calls with them and assisting with follow up. Martinez says Tolco tries to find the right mix of tools to serve each customer according to their needs. “There is no single solution to how to call on customers for us. It’s really a blended approach.”

Lewis says he didn’t know very much about Tolco until interviewing for a job there just before college graduation. Lewis started work at Tolco in January of 2009 and says that after eight years, he can’t imagine doing anything else. He notes how much he has benefited over the years from the collective experience of industry friends, other manufacturers, and customers. Martinez mirrors those sentiments, describing the Jan-San industry as “infectious” and relationship-based, one that “draws you in and keeps you,” noting that despite industry consolidation there are still many independent, family-owned companies like Tolco in Jan-San. “That’s a really unique dynamic that has been lost in other industries,” he concludes.

“The average employee tenure is a testament to this company,” says Martinez: many have been with Tolco no less than 10 years. Martinez once told a potential hire years ago, “There may be companies where you’ll have a more glamorous career or make more money, but you’re never going to have as much fun” as you will at Tolco. “That’s where our mission Be Great and Have Fun comes into play.” Tolco’s first employee retired in 2017 after 40 years, and the company has started to expand its “bench” in preparation for retirement of other key employees.

Martinez and Lewis both acknowledge the tensions that can arise between close-to-retirement managers and younger, often new-to-the-industry employees. Martinez says he finds Millennials (like Lewis) have a fresh outlook on the marketplace. Rather than give in to economic pessimism, Millennials are more likely to ask, How can we leverage our relationships, resources and value proposition to stay relevant in the market?

Lewis finished an MBA program through the University of Michigan in May 2017 with a focus on strategy and operations that taught him “models and approaches that you wouldn’t just pick up on the job. We’ve taken some of those concepts and applied them here at Tolco.” One innovation he has introduced at Tolco is automation of the sales process - utilizing data analysis and reporting to help inform sales decisions, quotations and objectives. “The addition of data analysis to highlight what’s important has really made us more effective and relevant,” Martinez states.

“What’s unique about both Will [Lewis] and Tolco Corporation is a willingness to change,” Martinez adds. “You have to be willing to embrace the change and the technology and the opportunity.” Lewis demurs, saying, “That’s something that Tolco has always been good at.”

Martinez believes Jan-San is an industry that doesn’t so much revolutionize as evolve. “And that’s the challenge,” he adds. “How do you make this widget [sic] a better widget or evolve it to the next logical iteration?” When asked about the decision-making process at Tolco, Lewis laughs and replies, “It’s loud!” Employees from sales, purchasing and operations gather to brainstorm and respond to each other, but with one caveat: “We’ve always done it this way” or “It didn’t work last time” are off-limits.

When considering a new product or feature, the main question at Tolco is, Does it fit into what we do? Ideas are often floated to trusted distributors and other partners for market feedback before planning and production begin. Lewis states that Tolco has been producing one or two brand new products per year in recent years. “All of Tolco’s growth has been organic,” says Martinez. “We haven’t done it through acquisition, and we’ve remained very true to ourselves.”

The company’s collaborative philosophy is also apparent in its approach to problem-solving. A standard process is in place for dilemma resolution, but employees are free to connect with each other for help with challenges. Lewis says Tolco’s physical centralization is one key to its success with an open-door policy. Located in two buildings across the street from each other, “It’s easy to get things done because everyone is accessible,” Lewis explains. “We all know each other by name, and we’re available for immediate feedback.”

Martinez states frankly, “We’re in this to be profitable, so we are very fiscally responsible as a company.” He says Tolco strives to provide good value for the price. New hires, products or capital expenditures must agree with both Tolco’s market strategy and its balance sheet. “We want to preserve our service, the quality of our products and the offering of products,” Martinez says. "I’ve seen a lot of companies (in the industry) struggle to capture business because they’re trying to do it at a price that doesn’t make sense.”

On the other hand, says Lewis, “We’ll try anything we can to help our customers, whether it’s special labeling or artwork or putting a kit together.” He says that Tolco tries not to put up barriers when it comes to helping customers get what they want. Martinez agrees, adding, “We may have tried something in the past that didn’t work but may now be feasible because of changing technology, materials or regulatory guidelines.” Nothing is ever really off the table at Tolco. “It’s always about the why,” he adds. “You can’t just dismiss something because it didn’t work before. You have to be cognizant of why and what may have changed since then.”

Lewis states, “Lately we are focused on being the easiest company to do business with.” He believes that Tolco will thrive by continuing to focus on its core competencies. “We’ll do what we do best; we’ll just try to do it better than we did before, through improved efficiencies, data analysis, and technological improvements.”